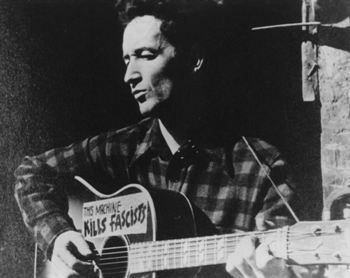 "I am out to sing songs that will prove to you that this is your world and that if it has hit you pretty hard and knocked you for a dozen loops, no matter what color, what size you are, how you are built, I am out to sing the songs that make you take pride in yourself and in your work."
— Woody Guthrie on song writing
Advertisement:

Woodrow Wilson "Woody" Guthrie (July 14, 1912 – October 3, 1967) was an American Folk Music singer, seen as one of the most powerful and influential musicians of his day, and a huge troublemaker against the forces of bullshit. He was a major inspiration for a lot of folk and protest singers, among them Bob Dylan, who saw him as his personal hero.

Woody Guthrie sang both traditionals as well as writing his own material. His songs are very left wing in nature and sympathize with the common man suffering under poverty, unemployment, racism, war, dictatorship and not being able to voice his opinions.

His Signature Song, "This Land Is Your Land" is still a standard, though in the original context it was actually a Protest Song instead of a Patriotic Fervor song. He originally wrote it as a Take That to Irving Berlin's "God Bless America,"note The revised version of "God Bless America" was released just two years before "This Land is Your Land" was responding to the song's nationalist undertones by singing about the importance of America's diversity and sense of inclusiveness. Hell, some early versions of the song are overtly political in nature—and a few of them even mention Guthrie's support of the Communist Party.

Woody Guthrie may also have written the earliest example of a Concept Album, Dust Bowl Ballads (1940), which is a narrative album about the dust storms that caused havoc on the people during The Great Depression.

In 1952, Guthrie was diagnosed with Huntington's disease. The illness forced him to retire from performing and composing, and he spent the final years of his life isolated from everyone except his close family.

On his birthday, July 14, his hometown Okemah, Oklahoma still organizes an annual folk festival that carries his name. In 2002 a 1944 recording of "This Land Is Your Land" was inducted in the National Recording Registry.

In 1998, a massive collection of lyrics he never set to music was recorded at last as a collaboration between Wilco and Billy Bragg; the project, dubbed Mermaid Avenue, would span two albums as well as a comprehensive box set. His son, Arlo Guthrie, became a musician himself and is most famous for his album Alice's Restaurant.

Woody Guthrie albums with their own page: