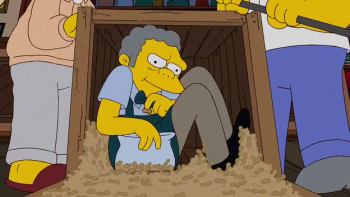 Packed with peanuts.
"I'm gonna wrap myself with paper
I'm gonna dab myself with glue
Stick some stamps on the top of my head
I'm gonna mail myself to you!"
— Woody Guthrie, "Mail Myself To You"
Advertisement:

Let's say you wanted to get somewhere really fast, or need to get someone out of your hair. Just send them through the mail! This is what human mail is — someone getting mailed (intentionally or accidentally) somewhere in a package.

Naturally, it would be nearly impossible for someone to actually get sent through the mail service in Real Life. While packages take time to deliver (several days to a week, at best), the package can be sent through in as short as a few hours or even minutes in fiction. This trope only applies if they are sent in a package or delivered as one.

Not to be confused with armor made out of humans. Despite the name, this can include human-like characters, such as Funny Animals.

See also Girl in a Box.