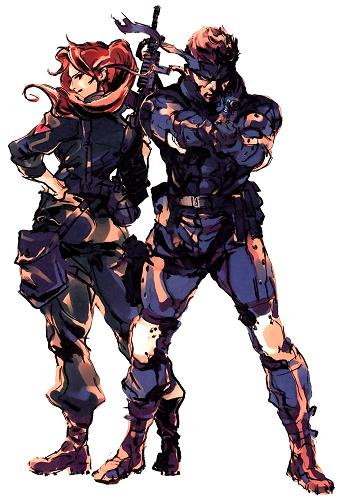 Snake and Chris.
Metal Gear: Ghost Babel, known outside of Japan as Metal Gear Solid, is a 2D Metal Gear game released for the Game Boy Color in 2000. Despite the game's overseas title, Ghost Babel is not a port of the actual Metal Gear Solid, but has enough of the same elements to be considered a reformulated game.note The game was developed after KCE Japan received a request from Konami's European division demanding a Game Boy Color version of Metal Gear Solid. The story is non-canonical and takes place in an Alternate Continuity set seven years after the events of the original Metal Gear.
Advertisement:

The Gindra Liberation Front, a separatist group in Central Africa, has set a stronghold in the fortress of Galuade, the place formerly known as Outer Heaven. When the GLF hijacks GANDER, a new Metal Gear model under development by the U.S. military, Solid Snake is called back into action and sent to Galuade to neutralize the threat. There he meets Chris Jenner (no, not THAT one), a surviving member of a Delta Force team sent to to recover GANDER from the GLF, who reveals that the guerrillas are being aided by the surviving members of Black Chamber, a defunct U.S. Special Forces unit that once rivaled FOXHOUND. Throughout the course of his mission, Snake fights the members of Black Chamber and finds out there's more to the terrorists' objective than Gindra's sovereignty.

The game design is based closely on Metal Gear 2: Solid Snake, but with elements introduced in Metal Gear Solid. For example, the screen scrolls instead of flipping between sectors and Snake can flatten himself into walls to see ahead like in the PlayStation game. The player's inventory is also handled similarly to Metal Gear Solid.