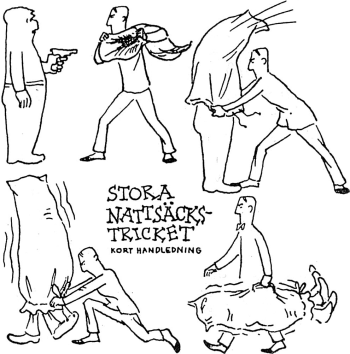 A tactic mostly seen in Western Animation: The villain usually sneaks up behind the target and throws a large burlap sack over their head and carries them off to his hideout; this usually happens to a Damsel in Distress or Snooping Little Kid. The target is typically female, but it can happen to male characters, just not as often. This can sometimes be a problem involving Hollywood Density - adult humans typically weigh 150-200 pounds, so one has to be very strong to casually pick up a load like that by themselves, especially since the person in the bag is frequently not just 150-200 pounds of dead weight, but instead is actively struggling to get out of the bag and away from the person carrying it.

Not to be confused with Bag of Holding. Somewhat related to Thief Bag, Carpet-Rolled Corpse.