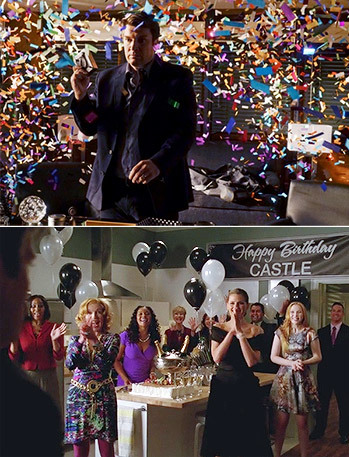 Worf: Because it is my birthday I assumed that you or one of the others would try to mount an unexpected social gathering.
Riker: A surprise party? Mister Worf, I hate surprise parties. I would never do that to you. ....
Cast: Surprise!
Riker: I love surprise parties.
— Star Trek: The Next Generation, "Parallels"
Advertisement:

Ah, your basic Surprise Party. Some characters throw a surprise party for another character. If it's pulled off correctly, then both A.) the character is taken completely by surprise and B.) the other characters have done a good enough job of keeping them distracted and entertained that there is no chance for a forgotten birthday situation. Alternatively, the party happens in a situation where they totally wouldn't expect it, so again, no chance.

A number of associated subplots may arise from this. One tactic is trying to keep the subject out of the house so their friends can sneak in and prepare the party; this usually has the person desperately wanting to go home, and the ruse using every trick they can think of to keep the person from going home.

The other case that frequently happens is the person is having a miserable day, and announces it so that all the party guests can hear it. Hopefully, the surprise party will help to fix their rotten day, though it isn't guaranteed. It's also possible that the friends may be inspired to throw the surprise party because they heard about the character's rotten day. Or maybe worse, the character might be a Birthday Hater or otherwise not a fan of celebrating; perhaps their friends' kindness will give them a change of heart, or perhaps not.

Admittedly, there are cases where it's just a regular surprise party, without any of the above, and these are more common than one might think. If it's not a straight example, though, then it might be any of the tropes that the Surprise Party is a supertrope of, which include the Not-So-Forgotten Birthday, Birthday Suit Surprise Party, Scary Surprise Party and its darker variant, the Shock Party, so please make sure that it's not one of these before adding it here.

Need not be a birthday party, though it often is, and if so, may be part of a Birthday Episode. Subtrope to Friendly Scheming. Also likely to happen to a character who has Never Had a Birthday Party.

Note that due to the surprise party's nature as an ending trope in many cases, you will find plenty of unmarked spoilers here.

with a lot of examples of funny/failed "SURPRISES!"

Dora and her friends surprise Boots on his birthday.

Dora and her friends surprise Boots on his birthday.