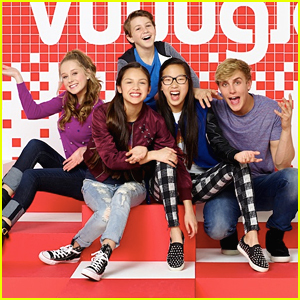 This is no iCarly, people, no iCarly! Note  From left to Right: Amelia, Paige, Bernie, Frankie, and Dirk. Not shown: Zane and Rodney.
Advertisement:

Bizaardvark is an American sitcom created by Kyle Stegina and Josh Lehrman that premiered on Disney Channel on June 24, 2016. The series follows Frankie (Madison Hu) and Paige (Olivia Rodrigo), two teenage best friends who post funny songs and comedic videos on the Internet. After hitting 10,000 subscribers on their Vuuugle channel Bizaardvark (a portmanteau of the words "bizarre" and "aardvark"), they are accepted into the Vuuugle studios, where they make their videos while also having to share them with other "Vuuuglers".

The third season premiered on July 24, 2018, with two new additions to the cast- Maxwell Simkins as Zane and Elie Samouhi as Rodney, as well as having a summer theme to the series, Paige and Frankie becoming mentors and big sisters to Zane and Rodney, as well as the move from the Vuuugle building to the Vuuugle House for the summer.

The series ended on April 13, 2019, after three seasons over three years.

Frankie and Paige show a video of no matter what they do, they get participation awards for everything, from losing major events which devolve into normal, mundane everyday stuff.

Frankie and Paige show a video of no matter what they do, they get participation awards for everything, from losing major events which devolve into normal, mundane everyday stuff.