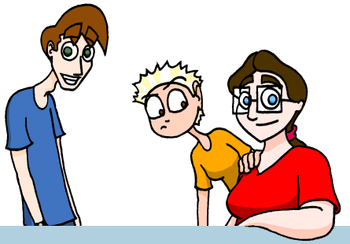 is a Webcomic published by Mason "Tailsteak" Williams from November 22, 2010 through April 10, 2017. It is a Slice of Life webcomic based on the life of Jamie the Supreme Chef, his roommate Ellen the Geek, and her best friend Maxine the polyamorous Lovable Sex Maniac. Other characters — for example, Lily, Ellen's boss, who Does Not Like Men — enter the scene as time goes on, but the primary focus is on those three.

Much like Tailsteak's previous comic 1/0, the strip is notable for delving into many philosophical and political issues, though with more breadth and realism than its predecessor. The characters are highly prone to navel-gazing and engaging in spiraling discussions about their wildly diverse personal philosophies. The author says his primary purpose in making the story is to encourage thought and discussion in his readers and often goes into a lot of depth in The Rant.