Webcomic / Led By A Mad Man 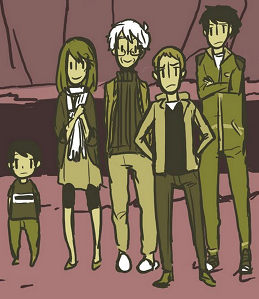 from left to right: Ian, Karen, Richard, Daniel, and Timothy

Led by a Mad Man is an After the End Webcomic following a band of five people, made up of Daniel (the titular madman who is determined to become the king of this newly abandoned country), Ian (a boy he picks up on the way), Richard (Ian's grandfather), Timothy, and Karen. They're now traveling aimlessly, presumably the sole survivors after a vaguely explained mass genocide.

Despite the dark backstory, the series itself seems to be planted just to the left of the middle on the Sliding Scale of Idealism vs. Cynicism.