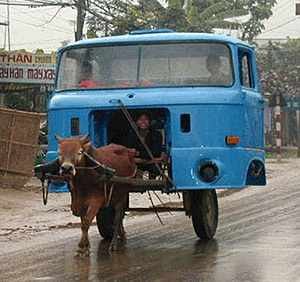 FOR SALE: 1979 IFA W50, orig paint, stereo, int. Engine swap. Will trade.
"...did you ever try to put a broken piece of glass back together? Even if the pieces fit, you can't make it whole again the way it was. But if you're clever, you can still use the pieces to make other useful things. Maybe even something wonderful, like a mosaic. Well, the world broke just like glass. And everyone's trying to put it back together like it was, but it'll never come together in the same way."
— Moira Brown, author of The Wasteland Survival Guide, Fallout 3
Advertisement:

In modern society, everything is so interconnected that any product is the result of that entire society. People who put products together, people who got the materials the products are made of, people who run the machines that generate the power required for those things... et cetera. Even the things people tend to forget or disassociate with the production of a product: people who write the manuals, people who act as "gofers" for all the other people, middle-management, the people who drive materials, and products around, etc. And that's without going into all the people who need to do their jobs so those people can do their jobs note For example, all these people need to have access to food, water, soap, and clothes. Drivers need gas, vehicles, tires, and paved roads. And so on, and so on....

Now, suppose a large majority of mankind were to be suddenly wiped out? There would be huge holes in the knowledge of how to produce things. Sure, someone might know how to fix the engine of a car, but if there's no one who knows how to make spark plugs, one is forced to hope they can find workable ones in the debris left After the End. And then there's the need for gasoline. And oil, and tires, and antifreeze and batteries, and... well, you get the idea.

And even if someone does know how to make those key components, all that knowledge is little more than useless trivia if the infrastructure of society has been disrupted to the point that the raw materials can no longer be supplied. This is especially true if the power grid has been destroyed since most modern manufacturing processes require extensive use of computers, power tools, and precision that no human hand is capable of.

These knowledge "holes" would tend to grow larger as generations went by. Society would have to rely on scavenging workable machinery without the knowledge of how it was made or the basic principles it works on, eventually resulting in Low Culture, High Tech.

This is the basis of a Scavenger World, and if enough of the cogs are lost you end up with Lost Technology.

Moreover, the physical cogs don't last forever; a Scavenger World that goes on long enough usually has to invoke Ragnarök Proofing to explain why anything still works at all.

In terms of combat, expect most people to be kitted out in Improvised Armour and wielding Improvised Weapons.

An elaboration of Schizo Tech. Possession Implies Mastery and Scavengers Are Scum (no relation) are always averted here. After the End examples of the Scavenger World often overlap with Crapsack World, though Scavenger Worlds no better or worse than the modern have occurred in fiction here and there.

Compare Cosy Catastrophe. Compare and contrast with Apocalyptic Logistics. See also Disaster Scavengers. If you ask a scavenger about where this stuff came from, they'll say it was all made in The Beforetimes. May also involve an Archaeological Arms Race. When technology is rebuilt from scavenged trash it's Scavenged Punk.