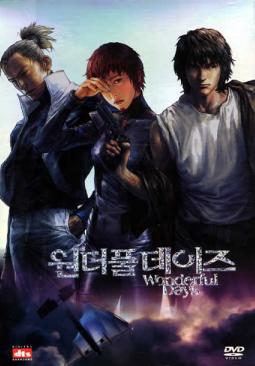 Would you know the colour 'sky blue' if you'd never seen the sky?
Advertisement:

Sky Blue (Korean: 원더풀 데이즈 Wonderful Days; yes, its Korean title is in English) is an animated movie, painstakingly shot over a period of seven years from 1996 to 2003 by Moon-sang Kim. It combines very impressive Computer-Generated Images with fluid and well-drawn traditionally animated characters. The impressive quality of the animation drew praise from numerous critics.

In The Future, a small elite live within the city of Ecoban. Ecoban's survival hinges on the Diggers, a huge population who live outside the city and supply it with the carbon it needs to keep functioning. Since Ecoban churns out huge quantities of pollution, the Diggers are understandably miffed by this.

The plot kicks off when Jay, an Ecoban police officer, attempts to apprehend her childhood friend, Shua, an exile who has infiltrated Ecoban to steal information necessary to destroy it. We then follow Shua as he attempts to make a better world for the Diggers while Jay and a couple of other enforcers investigate this rebellion. Jay, however, finds herself becoming drawn into the Diggers' side of the struggle, and begins to wonder if the fall of Ecoban might not be such a bad idea after all...