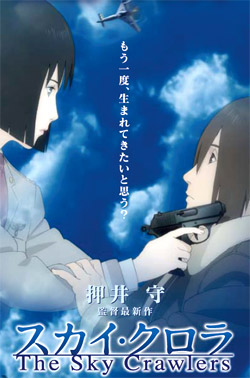 The Sky Crawlers is a 2008 Japanese anime film, directed by Mamoru Oshii and an adaptation of Hiroshi Mori's novel series of the same name. It is a melancholy take on war and those who fight it, but with several significant twists. For one, the world is at peace; it's companies doing the fighting, in order to sate the people's taste for war so that actual conflict does not take place. To fight their endless battles they use Artificial Humans called Kildren that are stuck in a perpetual adolescence of forgotten memories.

The film follows the pilot Yuuichi as he joins a new squadron of Kildren, and becomes intrigued by his cold, enigmatic and possibly insane commander, Kusanagi, who seems to know a lot more about the reality of the war than anybody else on the base. The story is as much about the pilots' downtime and their search for meaning as it is about the stunning aerial combat scenes.

If that doesn't sound appealing, keep in mind that this film is absolutely gorgeous. Broad pans and lingering shots are used just about any time combat isn't going on, which is most of the time.

The novel series consists of six volumes that were published from 2001 to 2008. They have been licensed for a digital English release by Breakthrough Bandwagon Books

A Licensed Game, serving as a prequel to the movie, developed by Ace Combat creator Project Aces and Access Games, was released in 2008 in Japan by Bandai Namco Entertainment. It was released 2010 outside Japan with the title The Sky Crawlers: Innocent Aces, which came as a surprise for fans as it seemed a prime candidate for No Export for You. The game was adapted into a two-volume manga.

The videogame contains examples of: