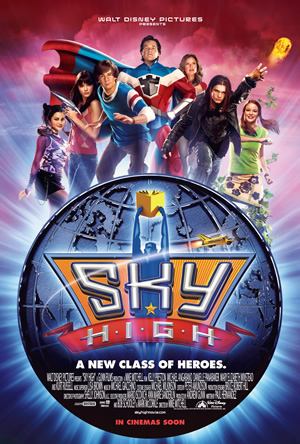 "If life were to suddenly get fair, I doubt it would happen in high school..."
"The kids who get bit by radioactive insects or fall into a vat of toxic waste, their powers usually show up the next day. Or - they die."
— Nurse Spex
Advertisement:

Sky High is a 2005 superhero film directed by Mike Mitchell and produced by Disney. Writing credits are shared by Paul Hernandez, Bob Schooley and Mark McCorkle. It was released in theaters on July 29, 2005.

The story revolves around Will Stronghold, son of the world's two most famous superheroes, the superstrong Commander (Steve Stronghold) and the flight-based Jetstream (Josie Stronghold). He is about to start high school at the titular Sky High, a school exclusively for people with superpowers and his parents' alma mater. Between dealing with Girl Next Door Layla (plant controller), son-of-archnemesis Jerk with a Heart of Gold Warren Peace (fireball thrower) and the typical cliques of high school (being either a hero or "Hero Support"), Will must also face the embarrassing fact that, despite his pedigree, he does not seem to have any superpowers. At least not yet...

It features a surprising number of high-level names, including Michael Angarano as Will Stronghold, Danielle Panabaker as Layla, Kurt Russell as The Commander/Steve Stronghold, Kelly Preston as Jetstream/Josie Stronghold, Lynda Carter as Principal Powers, Bruce Campbell as Coach Boomer, and Mary Elizabeth Winstead as Gwen Grayson. The film maintains a surprisingly sizable following, despite having generally fallen under the radar. This was also the first Disney-owned superhero movie scored by Michael Giacchino (The Incredibles doesn't count). None of his music was on the album released with the movie, but Intrada finally released his score

To the surprise of many, a sequel

was announced to be in development in 2017, although nothing has been heard of it since.

Not to be confused with the seinen manga by Tsutomu Takahashi. Or the silent film. Compare PS238 and My Hero Academia.

Will Gets Flying Powers

Will's flying powers kick in at just the right time.

Example of:
Die or Fly

Will Gets Flying Powers

Will's flying powers kick in at just the right time.