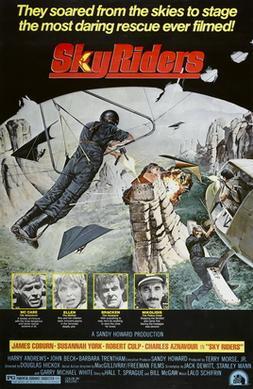 American industrialist Jonas Bracken (Robert Culp) learns that his wife Ellen (Susannah York) and his kids Jimmy (Simon Harrison) and Susie (Stephany Mathews) have been kidnapped from their home in Greece by the World Activist Revolutionary Army, a terrorist organization dedicated to spreading chaos, who demand a ransom of $5 million, then a large amount of arms and ammunition. Greek police investigate, led by Inspector Nikolidis (Charles Aznavour), who is more concerned with capturing the terrorists than with keeping the Brackens safe. Ellen's ex-husband Jim McCabe (James Coburn) has his own plan - he hires the members of a hang glider flying circus to rescue the prisoners from the isolated mountain monastery where they are being kept.