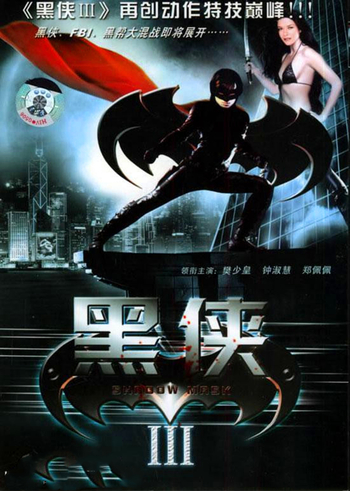 The title up there says "Black Mask 3". It's NOT.
Advertisement:

Shadow Mask is a 2001 Hong Kong martial arts/sci-fi/modern-day wuxia/romance movie starring Louis Fan and Cheng Pei-Pei. It's really obvious from its title, that this film is based entirely on the earlier Jet Li flick Black Mask, featuring a Suspiciously Similar Substitute protagonist which is an Expy of Black Mask except for the name, as well as having similar themes and storylines. In fact, this movie started off as a Black Mask prequel before being changed halfway into an independent film.

The Legendary hero known as Shadow Mask is assumed to have retired, having left his days of superheroing behind after defeating his arch-enemy, the Red Goddess, and imprisoning her years ago. But when Red Goddess' minions broke her out from prison, Shadow Mask will have to return to action once more, while balancing his responsibilities as a tutor and mentor to his adopted son and student, Fu Tien-ming (Louis Fan).