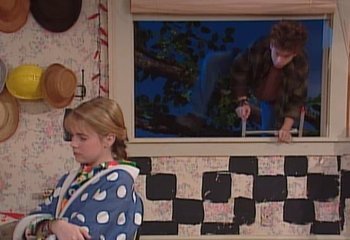 Someone—often the Girl Next Door, though not necessarily—enters the hero's house by climbing in their bedroom window. This can be done via ladder, trellis, close-standing tree, or some other, more obscure method. In some cases, there's a good reason for this: they're sneaking in, or the more traditional entrances are somehow blocked. Often, though, it seems like they do it just because it seems cool. Though found in many kinds of fiction, this trope is particularly prevalent in television.

If the window is shut, the traditional way to get the resident's attention is to throw gravel at it, but as that's become something of a cliché, it's usually subverted somehow (they break the window, or hit their friend with a rock, or discover they picked the wrong room...) Often the culmination of a Balcony Wooing Scene.

Just as often as it's used for hijinx, this trope is used for horror - see Breaking and Bloodsucking for a common variant. The image of a monster or killer climbing through a sleeping person's window and into their bedroom is fundamentally both an inappropriate entry and a violation of privacy, so there's a lot of potential rape subtext here.

Subtrope of There Was a Door. Contrast Bedsheet Ladder, which is for the person inside getting out. For the glass shattering Dynamic Entry variant, see Super Window Jump, which may also be at the same time as Fast-Roping. See also Broken-Window Warning, for when a rock is intentionally thrown at a window to break it in order to send a message.