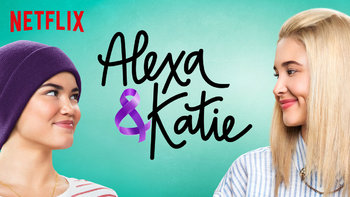 Alexa: This is the story of how I beat cancer. When it all started, my nurse told me to write down things I'm grateful for to help me be positive. That first day it was grape popsicles, my family and my best friend. I've been grateful for Katie a lot, but this time I'm super grateful for her. You'll see.
Season 1 episode 1 - "Bad Hair Day"
Advertisement:

Alexa & Katie is a Netflix original sitcom series about the bonds of friendship and family, and the struggles they face when a loved one is diagnosed with cancer.

Alexa is a fourteen year old girl who is in maintenance after undergoing treatment for leukemia. Luckily she has her best friend Katie by her side no matter what.