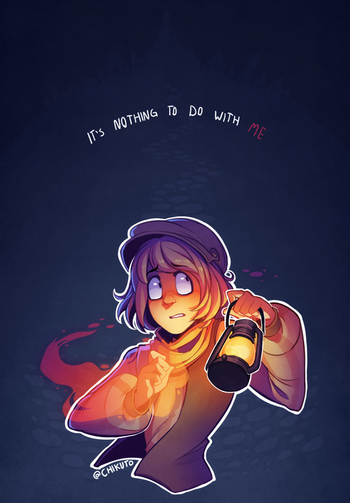 Swiggity swog, don't kidnap Cog.
Cog Kleinschmidt works happily as an artisan within the stronghold of the world’s leading empire, Mercia Fortress. He finds his life taking a screeching turn upon the arrival of a diplomat from the Kingdom of Arcadia, who needs something from Cog - whether he agrees or not!
Advertisement:

Cog soon finds himself trapped in the faraway Kingdom of Arcadia - an aristocratic haven with rich history and even richer tastes. Arcadia heaves with creepy undertones and conspiracies, but the citizens seem willfully ignorant of the bizarre events going on under their noses. Cog finds himself getting pulled further into Arcadia’s paranormal side, and decides the only way out is to solve the kingdom’s mysteries himself - with any help he can get from Arcadia’s stepford-like residents!

is a Fantasy Webcomic written and drawn by Chikuto

. While the story is still in its early stages, her Tumblr hosts plenty of work related to the project. A full backup of the comic can be found here