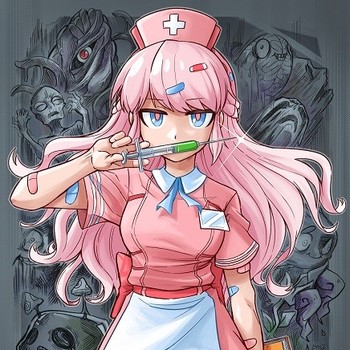 The doctor will see you now
Advertisement:

Welcome to Capital City! You'll hate it here. There's something in the water, corruption is everywhere and weird illnesses and phenomenons plague the daily life of every citizen. But not to worry, for in a small back-alley clinic, there's treatments for every disease. For a price, of course.

with character designs created by Satchel

the artist of Doki Doki Literature Club!. While not as well-known as Merryweatherey's more popular works, such as parody-comic I Made A Comic About Internet Explorer and horror-romance Stalker x Stalker, it has gathered a significant fan-base on it's own, due to it's creative setting, cool visuals and quirky, likable characters. The comic is available for free on Webtoon

"Clinic of Horrors" features examples of: