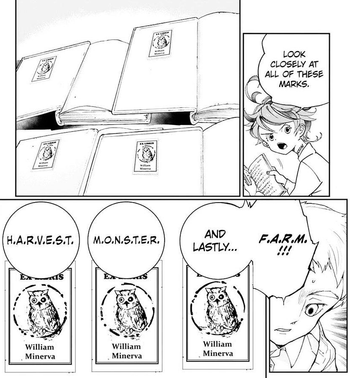 If you're wondering where they're reading the words from, it's in Morse code, on the rings around the owls.
Advertisement:

Alice needs to send a message to Bob without Eve overhearing. Unfortunately for Alice, she can't simply meet with Bob in private to discuss it, and sending a private message is either physically impossible or would arouse too many suspicions. The solution? Send a message to everyone, but encode, encrypt, or word it in a way that only Bob will understand the message. Alice might disguise the message in such a way that Eve will think it's a relatively innocent item, such as an advertisement (Wikipedia lists this technique as "Steganography

"), worded so that everyone but Bob will misinterpret the meaning, or simply make the message so hard to decode that only Bob could do it.