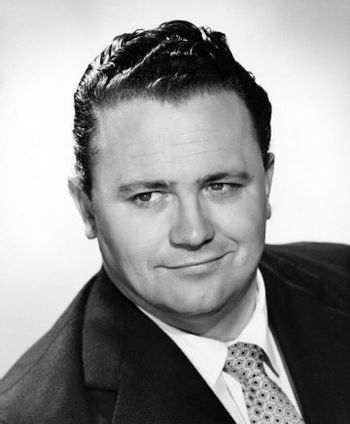 "My voice is not so much 'bel canto' as 'can belto'."
Advertisement:

Sir Harry Donald Secombe, CBE (8 September 1921–11 April 2001) was a Welsh entertainer. Primarily renowned for his fine tenor singing voice, he also had a talent for comedy.

Born on the 8th September 1921 in Swansea, Wales, his first job after leaving school was a disastrous stint in the pay office at a South Wales coal mine. He remarked afterwards that this is not an ideal place to discover you are numerically dyslexic. It was also an environment where with precious few surnames such as Williams, Jones, Owen, Hughes, Parry, etc, it was all too easy to assign the pay packet for Davies The Star Performer to Davies the Slacker. Only the outbreak of World War II and his call-up to the Royal Artillery saved him from being lynched by angry miners. Now all he had to fear were German and Italian soldiers.

Somewhere in Africa his path crossed that of fellow artilleryman Spike Milligan, who recalls seeing a group of artillery officers strolling unconcernedly to their campsite followed by a sweating gunner in coke-bottle glasses who was carrying all their kit. It was very definitely in Italy that Secombe recollects his first meeting with Milligan, who was in a regiment of heavy guns. Secombe had gone to bed one night in his position with the medium artillery he served. To gain maximum elevation, the heavy guns had dug in on a slope well above the mediums. Secombe remembers hearing the heavies open fire. And then there were a series of alarming bangs and thumps, as an insufficiently secured heavy artillery piece bounced down a hill, its recoil tipping it over the edge and down the slope, ripping up tents and tipping several light vehicles on their sides. He recalled a long, thin, cadaverous Bombardier with a torch following the weapon's trail of havoc through the British encampment, repeating the mantra "Blessed is he who hath seen gun." Secombe could not resist asking: "What colour was it?" "Green." replied Milligan. "Then it's over there."

Much later on, the two men, invalided out of front line service, met up properly in an entertainment unit set up to boost morale for serving soldiers. Here, they played with surreal humour, and the very first glimmerings of what later became The Goon Show were born in wartime Italy in late 1944. Secombe and Milligan played in the C2E Combined Forces Entertainment unit until 1948, taking their form of humour and music into Austria and Germany as well as into Italy.

Demobbed back to England, Secombe found lodgings in London, and obtained a regular slot at the Windmill Theatre, where up-and-coming comedians had the thankless job of entertaining a crowd who were impatient to see some more strippers. Secombe's routine consisted of a high-energy mime depicting how people shaved, from the schoolboy to the old-age-pensioner. As he used regular shaving soap for this display, having to "shave" up to nine or ten times a day regularly laid him out with skin problems. However, he met Michael Bentine at the Windmill, who was performing an equally off-beat mime act using a broken chair as a prop.He also met Peter Sellers at about this time, who was doing radio comedy ensemble routines for the BBC. Secombe then introduced both to Spike Milligan, who was sharing a bed-sitting room in the attic of the Grafton Arms... with a pet monkey.

Small parts in various BBC radio comedy shows followed, and this culminated in The Goon Show which ran on BBC radio for nearly eleven years. Secombe also toured as a comedian doing the variety hall and theatre circuit, sometimes solo and sometimes with other comics.

He was also renowned as a singer, and professional singers urged him to seek training and a career in classical opera. Secombe, however, limited himself to musical theatre and the occasional light opera, such as Gilbert and Sullivan. He also appeared in filmed versions of stage musicals, such as Oliver!, based on Charles Dickens' Oliver Twist.

Secombe regularly had his own variety series on BBC and ITV throughout the sixties and seventies, showcasing both his comedy and his singing. In the 1980s and 1990s, he was the presenter of choice on the ITV "Godslot" Sunday evening show, Highway. Secombe's strong Christian beliefs provided an anchor for his life and sustained him into retirement. While never as "stellar" a comedian as his lifelong friends Milligan, Bentine and Sellers, his was arguably the happiest and most contented life of the four. He died on the 11th April 2001 (aged 79) at his home in Shamley Green, Surrey, England, and was survived by his wife and sons.