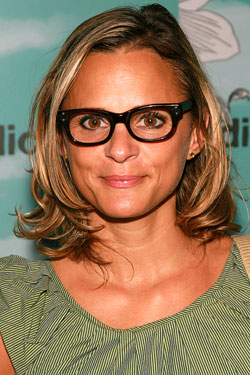 Amy Louise Sedaris is an American actor and comedian, best known as Jerri Blank on the cult TV series Strangers with Candy. She also voiced regular character Princess Carolyn on BoJack Horseman. From 2017-2020, she hosted her own show, At Home with Amy Sedaris, which is an Affectionate Parody of cooking, DIY, and home-crafts programs. She also plays mechanic Peli Motto in the Star Wars franchise, beginning with The Mandalorian Chapter 5.

She has written two books focused on crafting and hospitality, with a humorous twist, entitled I Like You: Hospitality Under the Influence (2006) and Simple Times: Crafts for Poor People (2010) (with her ex-boyfriend and frequent collaborator Paul Dinello).

She is the younger sister of the humorist and This American Life contributor David Sedaris. Despite being either the Butt-Monkey or a Troll in several of his tales of the Sedaris family, they are said to be very close friends as adults; they're certainly close enough to write plays together as "The Talent Family".