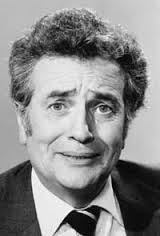 (On creativity) "I see things happen in my mind before they happen. I thought everybody did."
Advertisement:

Comedian, actor and author Michael Bentine CBE (born Michael James Bentin, 26 January 1922 — 26 November 1996) led a truly extraordinary life. Born in Watford to an English mother and Peruvian father, and brought up in Folkestone, Kent, he attended Eton alongside contemporaries such as Patrick Macnee. He attempted to enlist in the Royal Air Force in 1939 but was refused because of his "alien" parentage. note Nobody knew which way the South American countries were likely to go and Peru was thought too sympathetic to Germany. But nobody told the recruiting authority this, and Bentine went on tour with a theatre company, thinking his services were not required, only to discover he had been listed as a deserter by another part of the military bureaucracy. In his own words, during a Shakespeare performance he became the first deserter for four hundred years to be arrested by military police whilst wearing tights, codpiece and doublet.

This hiccup sorted out, a defective inoculation left him near dead and damaged his eyesight, rendering him ineligible for pilot or aircrew service. The subsequent near-death experience awakened an interest in paranormal investigation which would be part of his life until death. He was an occasional contributor to Fortean Times and wrote a series of books on his involvement with the paranormal.

Serving in the RAF as an intelligence officer, he cheated death several more times, leading to a conviction that he was being kept alive to achieve something. After the war, he drifted into showbusiness, following the well-worn path to the Windmill Theatre, London, where he met Spike Milligan, Peter Sellers, and Harry Secombe, among many others. Four men who all had their tales to tell about the inanities of the military bureaucracy hit it off, and The Goon Show was born. Bentine did not remain with the Goons for very long, and accounts vary as to the manner of his leaving. He went on to forge an independent career in TV, with visual comedy series such as It's A Square World and Michael Bentine's Potty Time, shows claimed to have influenced the visual aspects of Monty Python's Flying Circus and The Goodies.

He starred in several films and had a career as novelist, writer and stand-up comedian and raconteur. His lifelong interest in the paranormal generated two best-selling biographical books Doors of the Mind and The Door Marked Summer.