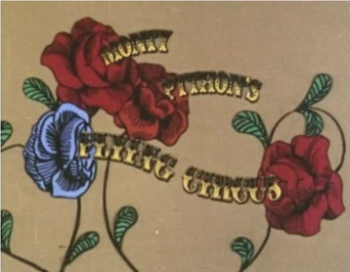 "One of the things we tried to do with the show was to try and do something that was so unpredictable that it had no shape and you could never say what the kind of humor was. And I think that the fact that 'Pythonesque' is now a word in the Oxford English Dictionary shows the extent to which we failed."
— Terry Jones at the US Comedy Arts Festival, 1998
Advertisement:

And now for something completely different...
It's...

Monty Python's Flying Circus.note Or as heard in the intro sequence, Mon-TEE Py-thons-a Flying Cir-cassss... A British Sketch Comedy television series featuring the comedy troupe Monty Python that originally aired on The BBC from 1969 to 1974. The success of its uniquely surreal lunacy has also generated four spinoff films to date, each featuring the same troupe in multiple roles before and behind the camera.

In its native country the show is considered by many to be one of the best British television programmes ever made, with the Pythons themselves regarded as essentially The Beatles of comedy (John Lennon and George Harrison were in fact huge fans, and Ringo Starr made a brief cameo in one episode). Monty Python invaded America with rebroadcasts on local PBS stations, two ABC late-night specials in 1975 (albeit horribly edited by the network, resulting in the Pythons winning rights to the master tapes in court) and a 1988 video release. They found a relatively small but devoted and appreciative audience stateside and influenced many American sketch comedy series over the years. On either side of the Atlantic, the show is now so firmly entrenched in pop culture that quoting a line from almost any sketch or one of the films triggers either a hail of quotes or a chorus of groans.

The show became so popular abroad that in 1971 and 1972 the Pythons produced two special episodes for West German and Austrian television under the title Monty Pythons fliegender Zirkus at the Bavaria studios in Munich. The first was done in German (memorized phonetically as none of them spoke the language), the second in English, and consisted mostly of material not seen before (although there is a German version of the Lumberjack song) note Some of the sketches - as in the case of some Python stage show material - were in fact taken from old At Last the 1948 Show scripts. An English-language motion picture, And Now for Something Completely Different, featuring remakes of many sketches from the series, was released by Columbia Pictures while the series was still on the air.

After their original run ended, the Python troupe made besides their own films many more in various non-Python-related collaborations, and all its members went on to continued success in film, television and other media. However Monty Python, as a troupe, disbanded upon the death of member Graham Chapman (though fans often consider any film with two or more members of the troupe in it as a Python film despite this).

As noted above, the show's seemingly random but actually highly sophisticated humour has spawned its own adjective — Pythonesque. Anything can happen during any given sketch, and usually does. Sketches end without punchlines, or the Pythons sometimes just stop mid-sketch and declare it all to be "too silly". Although the Pythons weren't the first to use these methods, they made them into an art form: postmodern, self-referential comedy, punctuated by Gilliam's absurdist animations and starring a whole lot of odd men in drag.

, which has loads of current information on the cast, clips, and a supply of original scripts.

To mark the original show's 50th anniversary, a remastered and upscaled "Norwegian Blu-ray" edition, restoring some content cut by the BBC and unseen for decades, was released in the autumn of 2019.

Vote on your favourite sketch here!

Some of the Most Famous Sketches

The BBC would like to apologize for the following tropes:

How Not to be Seen

How Not to be Seen