Just the Introduction to the Opposites 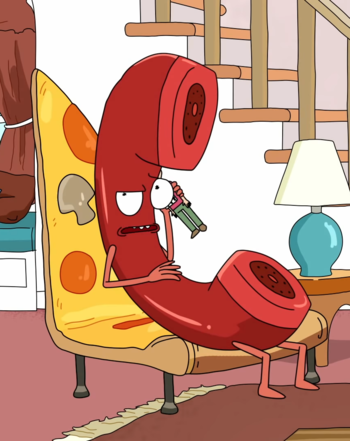 "Yes, I'd like one large sofa chair with extra chair, please."
"Over these houses, over these streets, hangs a pall of fear. Fear of a new kind of violence which is terrorizing the city."
"Yes - gangs of old ladies attacking defenseless, fit young men."
— Monty Python's Flying Circus
Advertisement:

A lot of comedy comes from switching around expectations. This trope is about a specific kind, where the roles in an interaction or relationship between X and Y are reversed. But unlike "Freaky Friday" Flip, Prince and Pauper, and Swapped Roles, no explanation or justification is given, and the context remains identical as though said roles were never reversed at all. The comedy is more about the absurdity that arises from this type of situation than what happens to the characters.

Let's say hypothetically, a princess, wearing in full regalia (Pimped-Out Dress, tiara and ermine-lined cape) walks down a hallway one way, while her servant, in a French Maid Outfit, walks the other way, carrying some food. The princess bumps into the maid, causing the food to fall on the maid, but the princess begs for forgiveness and tries to wipe off the maid's dress, while the maid hysterically snaps at the princess for being clumsy, and complains about how much her dress cost.

Occasionally this trope is used for drama and/or Satire, where the situation is meant to be thought-provoking instead of funny.

A Super-Trope of Gender Flip and Fantastic Fantasy Is Mundane. Often overlaps with Faeries Don't Believe in Humans, Either. Compare Hourglass Plot, Opposite Day, Persecution Flip, Stereotype Flip, Bad is Good and Good is Bad, and Russian Reversal.

Elton John, portrayed by Stewie, wants to be a heterosexual paper pusher, but his gay, old father wants him to be a loud and proud performer like him.

Elton John, portrayed by Stewie, wants to be a heterosexual paper pusher, but his gay, old father wants him to be a loud and proud performer like him.