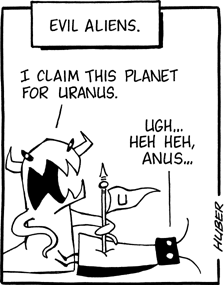 You put the flag in the wrong end.
"Our top story tonight: NASA sends probe to Uranus. People everywhere giggle."
— Colin Mochrie, Whose Line Is It Anyway?
Advertisement:

It doesn't help a bit to learn that Uranus used to be classified as one of the "gas giants,"

with an atmosphere believed to contain large clouds of methane, that there are rings around it

, and that it is constantly leaking gas

Obviously, this trope is almost exclusive to the English language, since other languages use different words (or at least different pronunciations) for "Uranus", "anus", and "your".

Subtrope of Heh Heh, You Said "X", Joke of the Butt, In My Language, That Sounds Like..., and Unfortunate Names. See also Pluto Is Expendable for a trope about a (former) planet that gets no respect.