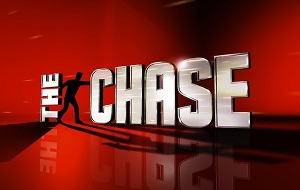 "These four people have never met before, but by working as a team, they have a chance to win thousands of pounds. There's just one thing standing in their way... the Chaser. The chase is on."
— Bradley Walsh
Advertisement:

British Game Show hosted by Bradley Walsh (two American versions also exist; see below). As explained at the start of every episode, a team of four players, never having met before, answer trivia questions to earn cash and then compete against the day's "Chaser" (one of several resident trivia/quizzing experts) for the chance to take home an equal share of the money the team earned overall. The name of the show comes from the need to answer enough questions correctly to stay ahead of the Chaser on the show's gameboard. Considering the Chasers have prominent backgrounds in local/national/international quizzing competitions, and the rather difficult nature of the questions, this is not easy.

The original two Chasers were Mark Labbett ("The Beast") and Shaun Wallace ("The Dark Destroyer"), with Anne Hegerty ("The Governess") joining in 2010, followed by Paul Sinha ("The Sinnerman") in 2011 and Jenny Ryan ("The Vixen") in 2015. All five are renowned quizzers of a similar caliber to Eggheads, including a Mastermind winner in the form of Wallace.note (In fact, all five have competed on Are You an Egghead?, with Wallace reaching the Series 1 final and Hegerty reaching the Series 2 semi-finals; Labbett and Ryan even faced each other in Series 1 (Ryan won), as did Hegerty and Ryan in Series 2 (Hegerty won).) Darragh Ennis, who appeared as a contestant on a winning team in 2017, became the show's sixth Chaser ("The Menace") in 2020. A primetime spin-off, Beat the Chasers, also launched that year, featuring singular contestants competing in a timed, head-to-head duel against multiple Chasers.

The first attempt to bring The Chase to America, with Mark Labbett (promoted as "The Beast" as opposed to his real name) as the single Chaser and Brooke Burns hosting aired on GSN for four seasons from 2011 to 2015. The rules were changed slightly, with only three people per team, a $5,000 per question Cash Builder, occasional six-figure "Super Offers"note (even higher than the increased offer, but the player had only a one-step head start and needed seven correct answers to bank the money), and a Live Studio Audience. Two episodes into the second half of the fourth season, GSN announced that the program would not be renewed, citing that it was too expensive to continue producing. The American version was also seen in Britain on the Challenge channel, where it's billed as The Chase USA. The third and fourth seasons would later be made available for streaming on Netflix. ABC rebooted the series for primetime in January 2021 with the Jeopardy! trio of James ("The High Roller") Holzhauer, Ken ("The Professor") Jennings, and Brad ("The Buzzsaw") Rutter as Chasers and Sara Haines replacing Brooke Burns as host, awarding $25,000 per question in the Cash Builder. This version adds a room called the "Chasers' Lounge" where the two non-playing chasers can watch the game and provide color commentary. Labbett would later join the ABC version for its second season, at which point the Cash Builder question value was reduced to $10,000. The third season, which premiered on May 3, 2022, saw the departure of Jennings and Labbett but also welcomed three new Chasers: Victoria ("The Queen") Groce, Brandon ("The Lightning Bolt") Blackwellnote a former champion of University Challenge, and Buzzy ("The Stunner") Cohen.

The Chase Australia began airing on Australia's Seven Network in September 2015. The Australian version was originally hosted by Andrew O'Keefe and features Anne Hegerty and local Chasers Matt Parkinson ("Goliath"), Issa Schultz ("The Super Nerd"), and Brydon Coverdale ("The Shark"). Mark Labbett joined the lineup in 2016, after the GSN version’s end; Cheryl Toh ("Tiger Mum") debuted in 2019, followed by former contestant Mara Lejins ("Smiling Assassin") in late 2022. In late 2021, Larry Emdur (from The Price Is Right and Wheel of Fortune fame) replaced O'Keefe as host after the latter was charged with assault in January 2021. Each correct answer in the cash-builder round earns $2,000.

Not to be confused with Sci Fi Channel's Cha$e. Also read Win Ben Stein's Money, which was a ring-in game show that also offered contestants a chance to beat the titular quizmaster for some quick cash.

Bradley Walsh tries and fails to pronounce the name of the longest town in Wales.

Example of:
The Unpronounceable

Bradley Walsh tries and fails to pronounce the name of the longest town in Wales.