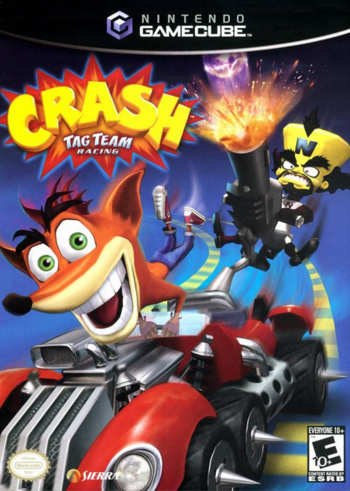 Crash Tag Team Racing is a racing/platformer hybrid video game released in 2005. It is (technically) the sixth Crash Bandicoot platformer, the third racing game in the series, and the first Crash installment developed by Radical Entertainment.
Advertisement:

Newsreporters Chick and Stew are covering the Farewell Race of Von Clutch's Motorworld. Not only is the place falling apart, some fiend has stolen the power gems that keep the park's attractions active, as well as the Black Power Gem that powers their cyborg owner, the eccentric Ebeneezer Von Clutch. As it just happens however, Crash Bandicoot and his Arch-Enemy Dr Neo Cortex have quite literally driven into the mess in a recent on-road feud. Von Clutch offers ownership of the park to whoever can find all the gems. The bandicoots decide to aid Von Clutch, while Cortex and his cronies, interested in setting up a new evil lair, decide to join in too.

The game consists not only of a standard racing game, but a short platforming adventure, largely consisting of Crash earning currency (in the form of Wumpa Coins) by collecting items and completing missions, usually to unlock more tracks and bonuses for racing modes. Despite being the third racing game in the series, it plays noticeably different from the previous two. While previous instalments were standard Mario Kart type affair, this is a more standard physics based racer, and is made unique by the gimmick of "clashing" cars with another player as a temporary cooperative.

This remains the final Crash Bandicoot kart racing game (not counting the remake of CTR, Nitro Fueled), though Radical Entertainment maintained development of the series' regular platform games through 2008's Crash: Mind Over Mutant, albeit with major art design and gameplay shifts.

Crash Team Racing: Nitro-Fueled, a remake of Crash Team Racing that was released in 2019, features some elements of this game: namely Chick and Stew on commentary, a handful of vehicles and costumes from the game, and in November 2019, Von Clutch and Pasadena were re-introduced as playable characters.