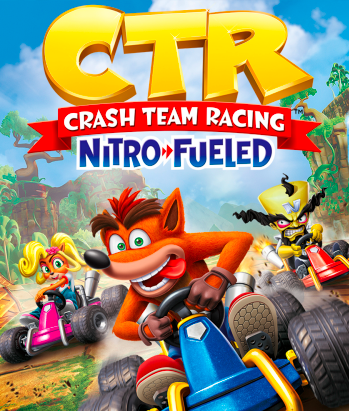 The original game* (With Crash Nitro Kart and a dash of Crash Tag Team Racing for good measure.)... revved up to the max.
Crash is back in the driver's seat!

Crash Team Racing: Nitro-Fueled is a remake of Naughty Dog's PlayStation racing game Crash Team Racing developed by Beenox. The game features the same updated graphics as the Crash Bandicoot N. Sane Trilogy, as well as a number of additional features, including characters and tracks from beyond the original game, kart customization, character skins, and online multiplayer; some of those features are taken from the two post-Naughty Dog era Crash Bandicoot racing games, Crash Nitro Kart and Crash Tag Team Racing.

It was released on June 21, 2019 for the PlayStation 4, Nintendo Switch and Xbox One.

This game's confirmed playable characters include:

See Cast Herd below for their character classes.