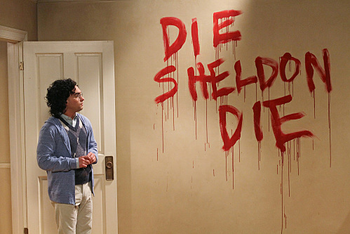 That's actually German for "The, Sheldon, the".
Advertisement:

A character's property is defaced by a slur, insult, or warning written in bold letters with the intent of terrorizing the recipient. Cars, desks, lockers, and doors tend to be the common locations. Generally it's anonymous and it's done to illustrate the views of the community against this one person rather than point to a single source of bullying.

It tends to show up mostly in media about teenagers, scorned women, or media that deals with civil rights and/or racial tensions.