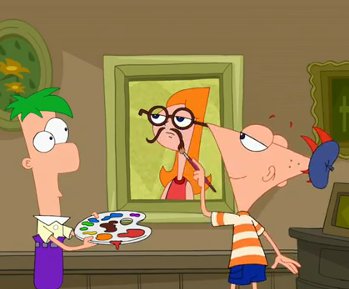 "Who puts a picture frame on a window?"
"We've all got a mission in life
We get into different ruts
Some are the cogs in the wheels
Others are just plain nuts
I'm just wild about Harry and Harry's wild about me!
Science is some folks' calling
Others pilot a ship
My mission in life, stated simply, is
A mustache on every lip!"
— Daffy Duck, "Daffy Doodles"
Advertisement:

Some people just can't leave well enough alone, especially if it's a work of art with a face. Mustache Vandalism is when a character, if they see a picture of someone they don't like, and it's within reach, draws a mustache, beard, or both on the picture. Often played with by having the picture be an actual person (but oddly, the one doing the drawing won't notice until the drawing is complete). Another example is erasing the mustache on a picture of someone who has one.

Decorations can include mustaches, beards, devil horns/tail, blacked-out teeth, spiky hair or the arrow through the head. If they especially hate the person, it may be a Hitler-type mustache, accompanied by swastikas.

Generally a comedy trope, it can show the vandal to have carefree humor. Can also be used more seriously, to show mild dislike for someone. Compare Face Doodling, where this is done to a live person while they're asleep/unconscious. A milder sister trope to Dartboard of Hate and Stab the Picture.

A subtrope is when a fugitive defaces a "Wanted!" Poster in this manner to delay being recognised. This may be followed by the appearance of a not-quite-Identical Stranger who exactly resembles the defaced poster. Contrast Photo Doodle Recognition, in which altering a picture leads to recognition of someone whose actual appearance has been similarly altered.

You Get a Fart Cloud

After reading Bitsy's letter in the newspaper, Paige draws one on the small, cartoon Bitsy. She and Owen then proceed to further vandalize the small figure.

You Get a Fart Cloud

After reading Bitsy's letter in the newspaper, Paige draws one on the small, cartoon Bitsy. She and Owen then proceed to further vandalize the small figure.