Literature / Protector of the Small 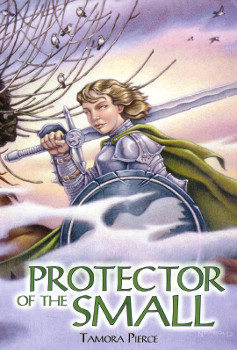 “When people say a knight's job is all glory, I laugh and laugh and laugh. Often I can stop laughing before they edge away and talk about soothing drinks.”
— Lord Sir Raoul of Goldenlake and Malorie's Peak, Squire
Advertisement:

The third series in the Tortall Universe. Ten years after King Jonathan decreed that noble girls can train for the knighthood, someone finally comes forward to accept the offer: Keladry of Mindelan, daughter of the Tortallan ambassadors to the Yamani Islands, Baron Piers and Lady Ilane. However, the presence of Alanna and Thayet hasn't magically done away with the deeply entrenched misogyny and paternalism of Tortallan culture, and Kel is faced with discrimination right away when the training master, Lord Wyldon of Cavall, insists that she be put on probation. Fighting against bullies and frequently shifting standards, Kel is ready to fight injustice and earn her shield.

Protector of the Small is also the last Tortall series to be a quartet. The success of Harry Potter made publishers realize that kids and teens will, in fact, read long books, allowing Pierce quite a bit more leeway after the writing of Page.

The character sheet may be found here.

Tropes appearing in this series include...