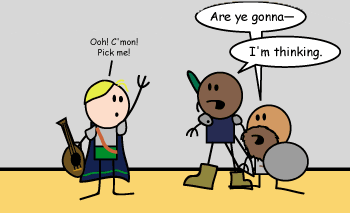 The Cloudcuckoolander or nobody? Tough decision...
"This song is dedicated to every kid who ever got picked last in gym class."
— Good Charlotte, "Little Things"
Advertisement:

A common phenomenon in gym class.

Whenever two captains are elected from a group of kids to pick teammates from the remaining kids (be it for dodgeball, basketball, baseball or any other team sport), the ones who are the least talented, most nerdy or simply staggeringly unpopular are always the ones left to pick from last, but a special type of humiliation is always reserved for the very last kid remaining. "Picked Last" isn't even a fitting term for what this really entails as the kid isn't actually "picked" by a team but rather is forced to be taken by one because there's no one else left to pick from.

This almost always happens to any Geek characters when the story focuses on a recreational activity. If this is supposed to be observed as a comedic event, it may be the fate of a Ridiculously Average Guy who is somehow less preferable to the geek, or, even more humiliating, that bit of Fridge Logic in the above paragraph is disregarded with the captains choosing players that aren't even supposed to be choices when only one kid is left; this may include adults or inanimate objects. Sometimes this character gets relegated to doing some trivial task, like water boy or scorekeeper, so they don't even get to play.

Usually, this character may be The Woobie, especially if it's clear that he really likes the sport even though he may lack any real talent, effectively taking the fun out of the game for him when he's left to be Picked Last. In these cases, the character may be given a moment to shine in the spotlight by the end of the story by becoming a team captain for a day and getting to do the actual picking, by making a great play in the game, or even both. Sadly, this may be the one aspect of the trope's overall use in fiction that isn't Truth in Television.

A part of Gym Class Hell. Compare The Benchwarmer.