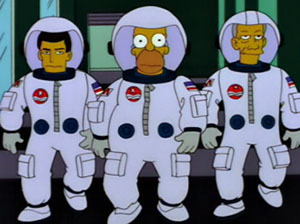 After discovering that the American people are more interested in sitcoms like Home Improvement and Married... with Children (read: sitcoms that have incompetent or hapless fathers) than telecasts of space launches, NASA decides to recruit an average man to go into space — and Homer (who has been passed up for a Worker of the Week award to an inanimate carbon rod) volunteers after they approach Barney Gumble.