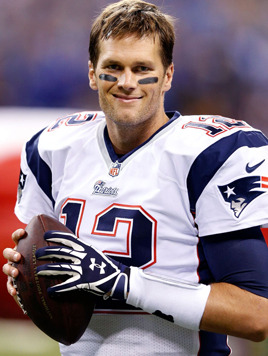 The Golden Boy himself.
Advertisement:

Thomas Edward Patrick Brady Jr. (born August 3, 1977) is an American Football player. From 2001 to 2019, he was the starting quarterback for the New England Patriots, then moved to the Tampa Bay Buccaneers for the next three seasons. Brady is widely recognized as one of the greatest quarterbacks in NFL history, with many (even his critics and opponents) arguing that he is the greatest due to a resume of championships and career statistics that dwarf those of every other player who has played the position.note There are numerous qualifications for greatness in football, a sport where no one player is solely responsible for a victory, rules and strategies change all the time, and many record-shattering players never win a title... but, as you'll see below, Brady's got a lot going for him.

After playing college football for the University of Michigan, Tom Brady was drafted by the Patriots in the sixth round of the 2000 NFL Draft. Brady rose from obscurity and became the starter after perennial Pro-Bowler Drew Bledsoe was injured in Week 2 of the 2001 season; he tallied an 11-3 record and won the Super Bowl that year. In Brady's 18 full seasons as a starter in New England (he missed nearly all of 2008 with a torn ACL), the Patriots earned nine trips to the Super Bowl and won six. Following this, Brady joined the Tampa Bay Buccaneers, a long-struggling team that held the worst franchise winning record in all North American professional sports, hadn't visited the playoffs in thirteen years, and hadn't won a playoff game since their Super Bowl victory the year after Brady's first title. In his first year with the franchise, the Buccaneers returned to the Super Bowl and soundly defeated the defending champion Chiefs as Brady won a record fifth Super Bowl MVP,note while the Patriots put up a losing record for the first time since Brady started playing for them an accomplishment that cemented Brady's name with Michael Jordan, Muhammad Ali, Wayne Gretzky, and Babe Ruth as the greatest competitor in their respective sport. Brady is the only quarterback to lead his teams to more than five Super Bowls (he's now led them to ten), holds the record for the most total Super Bowl touchdown passes, and is the first and only player to win six Super Bowls, let alone seven, which is more than any team has won in the history of the Big Game. He is only the second starting QB in history to win a title with two different teams (after longtime rival Peyton Manning won with the Indianapolis Colts and Denver Broncos) and the only one to do so in both conferences. Considering his career accomplishments, he is considered the greatest draft steal in NFL history.note It also had ripple effects on how the rest of the roster was built. The No. 199 pick used to get him was in itself a compensatory selection, and a significant discount off of Brady's projected 3rd round talent. His immediate success gave New England unprecedented riches at the quarterback position, allowing them to flip Drew Bledsoe for a first round pick in 2003, used to acquire All-Pro DE and two-time champion Ty Warren.

Obviously, in order to win that many championships, one has to be pretty great in all of the games leading up to it, and Brady has plenty of regular season accolades as well. He has thrown more career touchdown passes and accrued more passing yards than any NFL quarterback, with the nearest active runner-ups being a long distance behind him. He was named the NFL MVP in 2007 (when he became the first QB to throw for 50+ touchdowns in a season and led the team to a 16-0 regular season), 2010 (when he set an NFL record for consecutive passes without an interception, 358, and became the first player since 1986 to be unanimously chosen as MVP), and 2017 (when he became the oldest ever to win at age 40), as well as the 2007 Male Athlete of the Year by the Associated Press, the first NFL player to be so honored since 1990. He has been selected to more Pro Bowls than any other player (15) and won more division titles than any other QB (17). He likewise threw for more passing yards and touchdowns than any QB in NFL postseason history. His career playoff record is 37-11, a win total over twice the number of runner-up (and Brady's childhood idol) Joe Montana, the only other QB who has won multiple MVPs in both the regular season and Super Bowl. Brady helped set the record for both the longest consecutive win streak in NFL history (21 straight wins across 2003-04) and most consecutive playoff wins (10). At 44 years old in 2021, Brady became the oldest starting QB to win a game in the NFL, and while he continued to lead the league in many passing categories with no clear signs of slowing down, he ultimately decided to retire after the end of the season... only to announce his return not even two months later, deciding he still has "unfinished business" in the league.

Tom Brady has been a popular spokesman for several brands including Gillette, Dodge, Under Armour, Uggs, and Citizen watches. He has made guest appearances on Family Guy and Entourage. Additionally he had a cameo as himself in Ted 2, directed by Patriots Fan Seth MacFarlane and starring frequent Patriots owner's box guest Mark Wahlberg. He also had a small speaking role in Stuck on You with another Patriots megafan Matt Damon. He is also on the cover of Madden NFL 18, which even got a G.O.A.T. Edition inspired by him, and shared a cover with Patrick Mahomes (QB, Kansas City Chiefs) for Madden NFL 22.note Mahomes was also the cover athlete for Madden NFL 20, and both quarterbacks played in Super Bowl LV before the game's release. Whenever he does retire, he has signed a deal to go into the booth with FOX Sports.

He was in a relationship with Bridget Moynahan for two years, a union that produced a son. The two have remained Amicable Exes. He married Brazilian model Gisele Bündchen in 2009 and divorced in 2022; they have a daughter and a son.