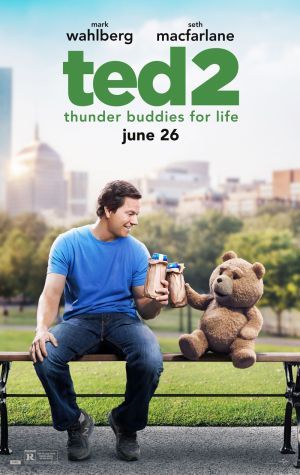 Ted 2 is a 2015 comedy film directed, co-written and co-produced by Seth MacFarlane, and is a sequel to the 2012 hit film Ted. Like the last film, it stars MacFarlane as the voice of Ted and Mark Wahlberg as his best friend John. Also joining the cast is Amanda Seyfried as a fresh-faced attorney.

In this film, Ted married his girlfriend Tammi-Lynn and they try to adopt a baby together. But it turns out that, being a teddy bear and therefore property, Ted is denied access and tries to fight for his civil rights.

The film will be followed up by a prequel series

set before the events of the original movie. McFarlane will return as writer, director, executive producer, and the voice of Ted. The show will air on Peacock.

Tropes contained in this film include:

After getting a weak signal on his phone, Ted borrows John's laptop only to find something more than he bargained for.

After getting a weak signal on his phone, Ted borrows John's laptop only to find something more than he bargained for.