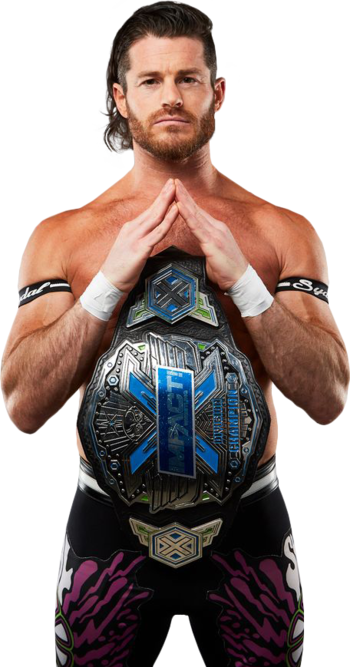 I was born to win! ♫
Advertisement:

Matthew Joseph Korklan (born March 19, 1983), known by his ring name of Matt Sydal, is a backyard wrestler turned professional wrestler who is best known for his work in World Wrestling Entertainment as Evan Bourne. Well before WWE though he was known for being the first person to obtain a wrestler's license in the state of Missouri at the age of 17, 18 usually being required. Even more impressive because Missouri is very strict about the required age. His pro debut came in Gateway Championship Wrestling on October 20 2000 but he is also known for stints in several other promotions, such as Dragon Gate, NWA-TNA and Ring of Honor. His WWE debut took place in 2008 when he was 25 and an 8 year veteran by then with the now-defunct ECW brand. Famous for his super junior style that is an amalgamation of Japanese, Mexican and European styles as well as yoga and martial arts. H won his first WWE Tag Team Championship

along side fellow flier Kofi Kingston, becoming the team known as "Air-Boom".

He is a former high school wrestler and has trained in martial arts and self taught gymnastics. In Dragon Gate he was the first gaijin to win Open The Brave Gate Title

. He became a one time Ring of Honor World Tag Team Champion

,note With Christopher Daniels and a WWE Slammy winner for "best finishing move" in 2008 for his Shooting Star Press.

He was released by the WWE in June 2014 but did not stop wrestling, reappearing in Dragon Gate in July of the same year and going on to work at Dreamwave, Evolve, Northeast Wrestling, Ring of Honor, Pro Wrestling Guerilla and more. In February of 2016, he and Ricochet would become IWGP Junior Heavyweight Tag Team Champions.

He is an Impact Wrestling X Division Champion

in his first reign and former Impact Grand Champion.After being a free agent for 6 years, he signed with All Elite Wrestling on November 17, 2020 where he is currently on a winning streak at 7-3.

Tropes associated with Evan Bourne include:

and he is a firm believer in civil disobedience.