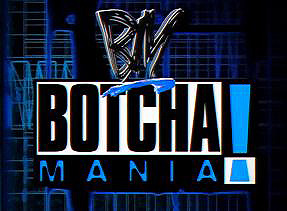 The limo-flyin', jabroni-eating, pie-beating—?
FACK!
"If you think for one second, McMahon, that I was just the right ga—guy, at the right place, at the wro—at the right time..."
— Hulk Hogan to Vince McMahon
Advertisement:

Even though Professional Wrestling might be "fake", it still requires a lot of athleticism and discipline on the part of all the performers involved. And granted, it's hard to watch what would look like a really cool move fail and fall apart — which usually amounts to things from selling a kick that doesn't really hit to high-risk-high-reward routines that crash and burn horribly. But if a performer does it repeatedly, and develops a reputation for screwing up frequently, well, then...it becomes entertaining (especially in regions like the Northeast US, where "You fucked up!" chants can spring up the very second someone botches).

Botchamania is a YouTube video series started and run by user Maffewnote sometimes short for "MaffewGregg", who compiles botches sent in from many of his viewers, usually set to video game music and/or remixes of video game music (with actual rock music thrown in every now and again). The number of subscribers to his videos grows with each new video, and he regularly comments on them in the movie description.

WWE, WCW, TNA, and a cavalcade of obscure indie and foreign promotions are all represented in the series. Notably absent are Ring of Honor, EVOLVE and New Japan Pro-Wrestling, who sent cease-and-desist notifications to Maffew - and, really, anyone who uses their material without their consent - which forced him to take down several of his videos, which he re-released with the compromising footage excised.

Maffew had a website dedicated solely to Botchamania - botchamania.net - but towards the end of March 2010, there was a sudden surge in the cost of hosting, and Maffew needed $500 to cover the traffic the site was getting. Donations poured in, covering the cost in roughly two days, but other technical difficulties caused the site to basically stall out; Maffew eventually started up botchamania.com,

and fans are hoping the site will actually stick around this time. (Now that it's sponsored by CHIKARA, that's looking more likely.)

He was featured on Reviewtopia, but was part of the mass exodus when it reformed into RVT in early 2013. Also in 2013 he became a featured contributor for WrestleCrap. He's also been guest-hosting OSW Review of late.

Tropes associated with Botchamania include:

Thanks For Watching
This trope has been checked out by Anonymous User—
FFFFAAAAAAACKIN' BOOLSHEEEEEEHHT!