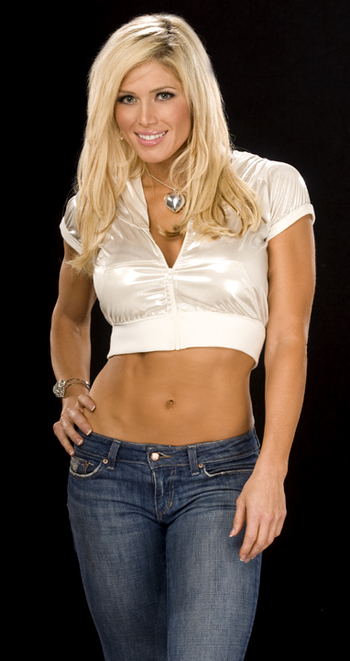 What do you do when everybody wants you?
Advertisement:

SEND FOR THE MAN!

Torrie Anne Wilson (born July 24, 1975) is a former WWE Diva from Boise, ID. Prior to wrestling she was a fitness model, winning several competitions like Miss Galaxy and the Women's Tri-Fitness Championships.

She got her start in wrestling when a boy she was dating brought her to a WCW event - and she was brought backstage to meet the wrestlers. At the time she was trying to break into the entertainment industry, and got offered the chance to walk to the ring with Scott Steiner. Kevin Nash later was interested in doing a storyline with her, and thus she became part of the roster. She would be involved in several notable storylines before getting released at the end of 2000.

However when WCW was bought out by WWF in 2001, Torrie was one of many employees hired and integrated in with the WWF talent. She debuted as part of The Alliance - initially a Dark Action Girl with Stacy Keibler, being mentored by Ivory. However, a storyline romance with Tajiri led to a Heel–Face Turn and made her part of Team WWF. When the brand split was introduced in 2002, Torrie enjoyed the biggest success of her career, and was pushed as the top Face Diva of the Smackdown brand. During this time, she had a notable nine month feud with Dawn Marie and was chosen as the covergirl for the 2003 issue of Playboy. The next year she would pose again, she and Sable becoming the first WWE Divas to pose together.

She was traded to Raw in 2005 and used more in a wrestling capacity, coupled with a big improvement in her ring skills, and started to compete for the Women's Championship. She was moved back to Smackdown a year later and rumours abound that she was going to be the first holder of the WWE Divas' Championship. But repeated back problems led to her taking a break from wrestling and eventually retiring in 2008. She has however made several reappearances and got an induction into the WWE Hall of Fame in 2019.

"I Just Need a Little Trope":