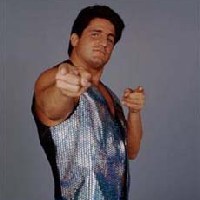 Glenn Gilbertti (born November 12, 1967) is an American professional wrestler best known for his work in WCW from 1995 to the bitter end as Disco Inferno. He debuted in the Georgia independent scene in 1991 and also competed in the USWA in Memphis. He debuted in WCW in Fall 1995 as a midcarder, winning matches against low-ranked competitors but losing to bigger names, including Eddie Guerrero and, in his last WCW appearance, Sabu. Over the course of his WCW career, he would hold the WCW World Television Title

once. He has also competed for Impact Wrestling, Dragon Gate, Juggalo Championship Wrestling and many other promotions. In 1995, The Wrestling Observer Newsletter gave him their "Best Gimmick" Award.

Not to be confused with Disco Inferno.

"I know you all came here tonight to read the Disco Inferno's tropes":