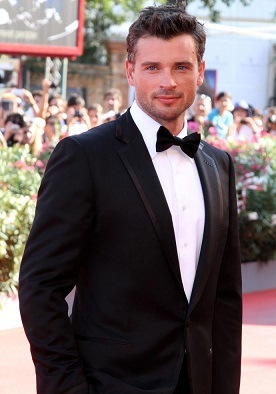 No, he's not wearing any blue and red costume underneath the tux.
"You know one of the things about going from modeling to acting is it's so much more fulfilling. With modeling, you get your picture taken, which is great, good for you, you know? But in acting, you're able to reach in and show a little bit more of yourself."
Advertisement:

Before getting into acting, Welling was a high school athlete, and then a Fashion Model. He has also been involved behind the camera as an executive producer and a director; he directed seven episodes of Smallville and became one of the show's producers in its last two seasons. He also produced the short-lived Hellcats.

He is a tall man, standing roughly 6'3. This makes him the second tallest Superman to date behind Christopher Reeve.note He beats Brandon Routh and Henry Cavill by mere centimeters, 6'2 1/2 and 6'1 respectively compared to Welling's 6'2 3/4

"Somebody save me..."
Feedback