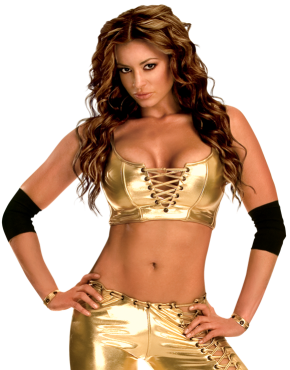 "Let me show you what love is..."
Candice Michelle Beckman Ehrlich (born September 30, 1978) known professionally as Candice Michelle is an American model, actress, and retired professional wrestler who worked for WWE from 2004 to 2009.
Advertisement:

After winning a modeling competition at her local skating rink, Candice moved to Los Angeles, to become a professional model and actress, making appearances on television programs such as Party of Five, 7th Heaven and Hotel Erotica, as well as appearing in films such as Tomcats, Anger Management, DodgeBall: A True Underdog Story and A Man Apart.

After participating in the WWE Diva Search, Candice was hired by WWE in 2004 under the gimmick of a makeup artist before being moved to 'SmackDown' and joining Vince's Devils. She moved back to Raw in 2005 and eventually became a full-fledged wrestler, winning her first and only WWE Women's Championship in 2007. She retired from wrestling after being released from her WWE contract on June 19, 2009.

Outside of pro wrestling, she is known for her work as the Go Daddy Girl, the mascot of its Super Bowl commercials. She appeared the February 2009 issue of FLEX magazine alongside fellow Divas Beth Phoenix and Layla, and posed for Playboy once in 2002 and again in 2006. In 2017 she made a one night only appearance for House of Hardcore - wrestling an official final match against long time friend Lisa Marie Varon.

Too Much Tropin' Never Hurt Nobody