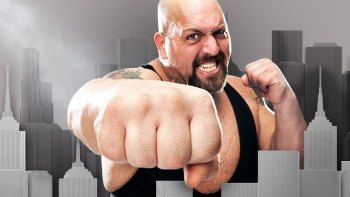 Paul Donald Wight II (born February 8, 1972) is an American professional wrestler currently working for All Elite Wrestling. Standing at 7'1" (216 cm) tall and weighing 440 pounds (200 kg) (he used to be even heavier, but has dropped a lot of weight recently), he is billed as the "World's Largest Athlete". He had been with WWE from 1999 to 2021 under his best-known ring name (The) Big Show, and had worked in WCW as The Giant before that. (He was even billed as the son of André the Giant, though there's no relation.) His title is not just for show, as he's one of the most athletic "giant" professional wrestlers. He is a 2x WCW World Heavyweight Champion

note With Sting and with Scott Hall, a 2x WWE Champion

note Twice with The Undertaker and once with Kane, a 3x WWE Hardcore Champion

note Once with Chris Jericho, once with The Miz and once with Kane and a 1x WWE ECW Heavyweight Champion.

Not related to Our Wights Are Different.