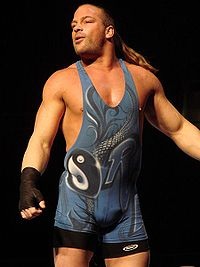 One of a kind!

Rob Van Dam (real name: Robert Szatkowski, born December 18, 1970) is a professional wrestler who currently works for Impact Wrestling. He became famous for his stints in ECW and WWE. One of RVD's most famous accomplishments in ECW was that he held the ECW World Television Championship for 700 consecutive days, the longest reign of any ECW title holder, and made the title as important as the ECW World Heavyweight Championship.
Advertisement:

As you might have guessed, he has an uncanny resemblance to Jean-Claude Van Damme. Super uncanny, hyper flexible guys known more for their cool stunts than acting ability and have had drug problems that have harmed both of their careers. He was given the name by wrestler Ron Slinker.