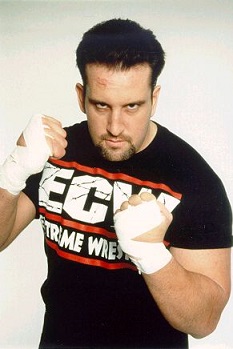 "Thank you sir,
may I have another?"
"They call Paul Heyman the brains of ECW, they call me the voice of ECW. Tommy Dreamer was always the heart, the soul, the guts of ECW."
—Joey Styles, ECW One Night Stand 2005
Advertisement:

Thomas James Laughlin (born February 13, 1971 in Yonkers, NY) is an American radio host, Professional Wrestler and promoter best known for his time in the original ECW as Tommy Dreamer. He debuted in 1989 and wrestled in New England independents as T.D. Madison before coming to ECW in Fall 1993. Over his time in ECW, he would go from a loathed suspenders-wearing pretty boy (in the eyes of the audience) to "The Innovator of Violence" and one of the promotion's top stars. He would hold the NWA ECW/ECW World Tag Team Titles

Despite his real name, he has no connection to the auteur of the 1970s Billy Jack movies.

"The Innovator of Tropes":