Series / Who Wants to Be a Superhero? 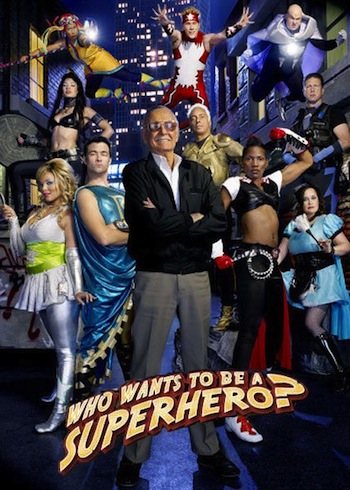 Stan Lee and the cast of Season 2
"Today, I am a wiener. Not a winner."
Major Victory, Who Wants to be a Superhero
Advertisement:

Who Wants to Be a Superhero? is a reality show hosted by Stan Lee, creator of Spider-Man, the original X-Men, The Incredible Hulk and the Fantastic Four. Contestants dress up as comic book superheroes of their own invention.

Each week, Lee challenges the contestants to represent what "superheroes are all about." The twist is that almost every challenge has a second Secret Test of Character that will be obvious to the viewer. Each episode, one or more of the superheroes deemed the least deserving is eliminated. The grand prize for the winning superhero is to have his or her character star in a Dark Horse Comics comic book written by Lee. They also have a cameo appearance in an original movie to be aired on Sci Fi Channel; whether or not this can be considered a reward is debatable.

A UK version aired on CBBC in early 2009. Instead of adults, the contestants were children. The programme was hosted by CBBC presenters Sam Nixon and Mark Rhodes while Stan Lee merely contacted the heroes through a television set to give them their missions and later give a debriefing. The premise is basically the same mentioned as in the above paragraphs. The prize for the winner is to go to Hollywood and be turned into a comic book hero by Stan Lee. Unlike the American version they did not appear in their own TV movie, and the winner's comic was not sold in the shops.

The two winners of the two American competitions are Matthew "Feedback" Atherton (Season 1) and Jarrett "The Defuser" Crippen (Season 2). The winner of the UK version was Karl "H2O Man" Harris.