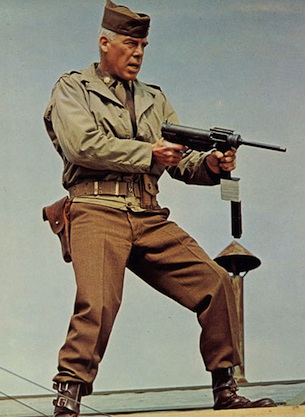 The rank of Major is one often overlooked in works of fiction. It is neither quite as cool as 'Colonel', nor does it have the same ring as 'Captain', nor does it have the same air of authority to it as 'General', and so for the most part is an ignored rank. But occasionally a character comes along, who happens to hold that rank, and do so while being a major badass. This trope covers those people.

Major is the junior-most field officer there is. This means that, while a Major can be bossed around by higher-ranked officers, they also have the most room to grow. This makes them ideal protagonists. Among field officers, a Colonel Badass may be more of a leader and authority figure, but it's the Major who gets his hands dirty, shows what he's really made of, faces the music head on — and is affected by the consequences.

Therefore, while a certain amount of badass is almost expected from higher ranks (that's why they got promoted, after all), Majors will likely take levels as the plot moves along, and become leaders in their own right.

If we're talking about naval officers, the equivalent in rank and awesomeness would be a Lieutenant Commander. For Authority Tropes in general, the next step down is arguably Dean Bitterman. The next step up is Commanding Coolness.

In various Japanese media involving pilots or an air wing, invariably the senior pilot will be a Major or a Lieutenant Commander; due to the IJN's heavy reliance on enlisted pilots, it was common for a carrier's air wing to be commanded by a Lieutenant Commander, as opposed to a full-bird Captain in the US Navy.