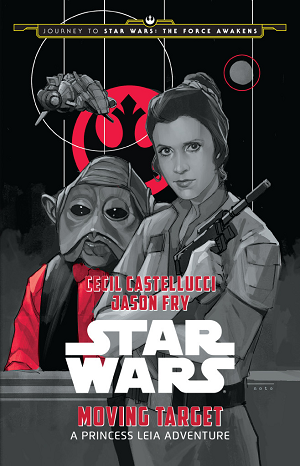 Reeling from their disastrous defeat on Hoth, the heroic freedom fighters of the REBEL ALLIANCE have scattered throughout space, pursued by the agents of the sinister GALACTIC EMPIRE.
Advertisement:

One rebel task force protects PRINCESS LEIA, bearing her in secrecy from star to star. As the last survivor of Alderaan's House of Organa, Leia is a symbol of freedom, hunted by the Empire she has opposed for so long.

The struggle against Imperial tyranny has claimed many rebel lives. As the Empire closes in, Leia resolves to make a sacrifice of her own, lest the cause of freedom be extinguished from the galaxy...

Moving Target: A Princess Leia Adventure is a junior novel set in the Star Wars universe, written by Cecil Castellucci and Jason Fry with illustrations from Phil Noto. It was released on September 4, 2015 as part of the "Journey to the Force Awakens" series.

Set in between the events of The Empire Strikes Back and Return of the Jedi (with a prologue and an epilogue set in the timeframe of The Force Awakens), Moving Target follows Princess Leia as she and a team of Alliance operatives embark on a risky mission to divert the Empire's attention away from the gathering Rebel fleet at Sullust as the Alliance prepares to strike at the second Death Star. Accompanying Leia are: Nien Nunb, a Sullustan ex-smuggler turned Alliance pilot; Major Lokmarcha, a Dressellian resistance fighter turned Alliance commando; Kidi Aleri, a Cerean communications specialist; and Antrot, a Abednedo technician and demolitions expert.