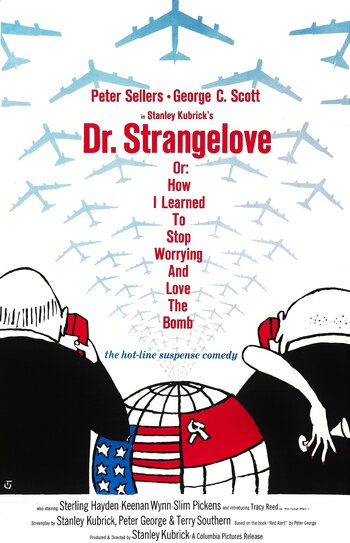 Theatrical poster by Tomi Ungerer.
"Gentlemen, you can't fight in here! This is the War Room!"
— President Merkin Muffley
Advertisement:

Dr. Strangelove or: How I Learned to Stop Worrying and Love the Bomb is a 1964 Black Comedy film directed by Stanley Kubrick. The plot is largely taken from the 1958 novel Red Alert

by Peter George, who co-wrote the film's screenplay with Kubrick and Terry Southern. (The same plot, played straight, is used in Fail Safe, which coincidentally enough was another Columbia Pictures release from the same year.)

One day during the Cold War, U.S. Air Force Brigadier General Jack D. Ripper (Sterling Hayden) goes a little funny in the head and does a silly thing; he orders all the B-52 bombers under his command to carry out a surprise, first-strike nuclear attack on the Soviet Union, then puts his entire air base into lockdown, ordering all outside communications cut, all radios confiscated (so that Communist infiltrators can't receive outside commands) and all troops to immediately fire upon anyone who tries to enter the base, even if they appear to be fellow Americans (because they will surely be those wily Communists in disguise). Ripper's aide, British Group Captain Lionel Mandrake (Peter Sellers), tries to talk sense into him but shortly realizes that the general has gone right out of his pointy little head, believing that only he stands in the way of a Communist plot to contaminate Americans' "precious bodily fluids" via fluoridated water.

At the Pentagon, U.S. President Merkin Muffley (Peter Sellers again) holds an emergency meeting in the War Room with his top advisors. While the Joint Chiefs of Staff chairman, General Buck Turgidson (George C. Scott), views the crisis as an opportunity to hit the Russkies where they live once and for all, the President's wheelchair-bound, ex-Nazi science advisor, Dr. Strangelove (also Peter Sellers), and the Soviet ambassador (Peter Bull) both warn Muffley that any attack on the USSR will trigger the Doomsday Machine: a computer programmed to detonate buried cobalt bombs that will kill nearly all life on Earth's surface with their radiation over the course of months if the Soviet Union is attacked (or if any attempt is made to disable the Doomsday Machine). So the President gets on the hotline and desperately attempts to convince the drunken Soviet premier that the imminent attack is merely a silly mistake while the military tries to call the bombers back.

The film was supposed to be released in November of 1963, but was held back until January of 1964 to distance it from the JFK assassination. Also in the cast are Slim Pickens as Major T. J. "King" Kong, who commands one of the bomber crews; Keenan Wynn as Colonel Bat Guano, who heads the Army unit ordered by Muffley to attack Ripper's base; and James Earl Jones (making his screen debut) as Lieutenant Lothar Zogg, the bombardier for Kong's crew.

Not to be confused with Doctor Strange, or with '60s MLB player Dick "Dr. Strangeglove" Stuart.note Whose nickname was nonetheless an obvious Shout-Out to this film.

Example of:
Riding the Bomb