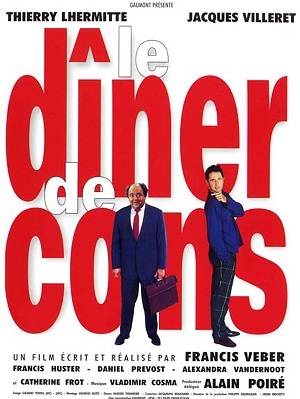 Every Wednesday, French editor Pierre Brochant and some of his friends organize a very special dinner: a "dîner de cons" (Literally: "Dinner of shmucks"), where whoever brings the dumbest guest wins.

Desperate to find a suitable candidate for the week, Brochant invites a friend's recommendation: François Pignon, a taxman who build models out of matchsticks and seems like "a real winner". Unfortunately, Brochant hadn't exactly counted on the fact that on the evening of the dinner, he'd have thrown his back playing golf, his wife would have left him and he'd be stuck at home, alone with Pignon...

A 1998 French comedy directed and written by Francis Veber, Le dîner de cons (The Dinner Game) was a financial and critical success in France and in the United Kingdom. Based on Veber's long-running play of the same name, the movie won Best Scenario, Best Actor and Best 2nd Actor at the Césars Awards. It remains a cult movie in France and one of the late Jacques Villeret's most beloved roles.

It was remade in America as Dinner for Schmucks.