Come Back to Bed, Honey 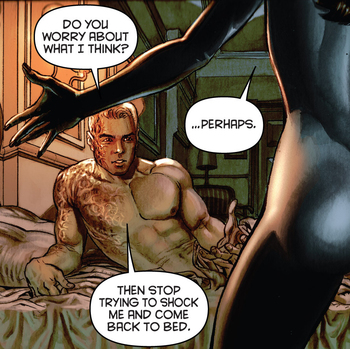 When one partner has to go somewhere and the other wants more sex. Often used to show just how devoted a character is to the task at hand — they're refusing sex in order to get on with it — while their Satellite Love Interest only has one thing on their mind. That, or it just serves to suggest the character is that good in bed. Alternately, it can lead to Coitus Uninterruptus.
Advertisement:

A common, more chaste use is when one character gets up in the middle of the night to contemplate something (common in mystery and Urban Fantasy stories) and their significant other wakes up and asks their beloved to come back to bed, so they can sleep.